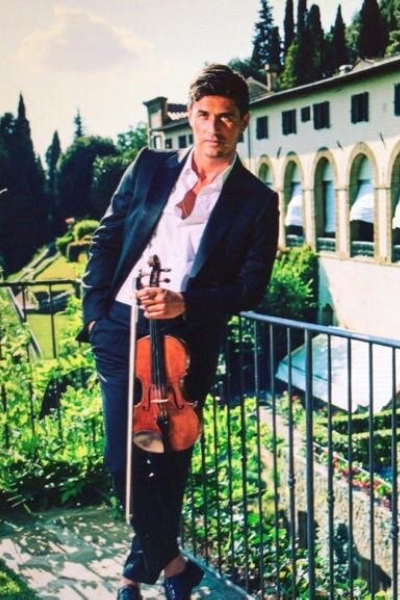 on Thursday, Sept 17 at Noon EST

Charlie Siem, one of the world’s most acclaimed violinists, will perform an exclusive live concert on Thursday, Sept 17 at 12 noon EST at Belmond Villa San Michele Florence as part of the “Belmond Invitations,” a virtual program highlighting the arts through the lens of travel and culture. The concert will stream live on Instagram at @belmond and @charliesiem.

The 34-year-old virtuoso, who has traveled the world performing with the most prestigious orchestras and symphonies, will preview songs from his upcoming album Between the Clouds, which debuts Nov. 20th on Signum Records. The new album is he first from Siem in six years and includes original compositions. His previous album, Under the Stars, was a critical and commercial success.

Siem, who resides in Florence and Monte Carlo, is a frequent visitor to Villa San Michele, one of Florence’s most historic and picture-esque properties.

“Villa San Michele has been one of my favorites for years, and I’m very excited to collaborate with the hotel and Belmond on an exclusive Instagram concert live,” said Charlie Siem. “The property’s beauty, history and setting will provide the perfect backdrop for my performance, where I will preview songs from my upcoming album.”

“We have long admired Charlie’s career as an ambassador of classical music who appeals to a wide range of fanbase across the world,” noted General Manager Emanuele Manfroi. “He shares our deep love of Florence and together we are delighted to treat Belmond followers, who are dreaming of their next trip, with this very special concert.”

“When Charlie Siem gets the tiger under the chin, it purrs.” – Vanity Fair Born in London, Siem studied the violin at the Royal College of Music with Itzhak Rashkovsky, and later with Shlomo Mintz, while attending Eton College and Cambridge University. At only 30 years of age, he became the youngest Professor of Music in the UK (Leeds College of Music). He performs with one of the rarest instruments on the classical music stage — a priceless 1735 Guarneri del Gesù violin once owned by the king of Prussia. The classically-trained musician also works with many of the world’s finest orchestras (The Royal, the Moscow and the Rotterdam Philharmonic Orchestras; the Czech and the Oslo National Symphony Orchestras) and conductors (including Charles Dutoit, Edward Gardner, Yannick Nézet-Séguin, Sir Roger Norrington, Libor Pesěk and Yuri Simonov) and performed for the Queen of Denmark. Siem has also performed onstage with stars like The Who, Bryan Adams and Jamie Cullen, while winning a unique fan base including Lady Gaga, Katy Perry and Karl Lagerfeld.

Nestled in the verdant Fiesole hills, Belmond Villa San Michele echoes Florence as a whole. Combining 14th-century artistic flair with the region’s ethereal beauty, the hotel is as inspiring as the city’s greatest cathedrals and galleries. Its facade, attributed to Michelangelo, is surrounded by lush woodland and terraced gardens. Guests can enjoy an unparalleled panorama over Florence and the Chianti hills beyond. Julia Roberts, Vivienne Westwood, The Prince of Wales and John F. Kennedy are among a long list of illustrious former guests. Fiesole itself has historically drawn the richest and brightest Florentines. The Medicis built their villas here, and Renaissance artist and Dominican friar Fra Angelico took his vows among the same hills. In 1506, Leonardo da Vinci first demonstrated his flying machine from Montececeri Park, a short journey from the front door. It was about this time that a community of Franciscan monks first laid the foundations for what would later become Belmond Villa San Michele. Today, within its warren of rooms and corridors, vaulted ceilings and worn terracotta floors count among its charming original features.

The hotel’s 46 guestrooms and suites—including the private 3-bedroom Limonaia Villa—have a fittingly serene feel with antique furnishings and old master paintings. Guests can relax in the gardens, tinged with the scent of orange blossom and rose, and opt to learn from a resident gardened. Of special note is a 200-year-old wisteria that in spring swathes the lawn-facing facade in purple. The swimming pool is perched on the hillside while taking in breathtaking views of the Arno Valley. Cooking and mixology classes can be coordinated, but for the best of Tuscan inspired cuisine, book a table at the sophisticated La Loggia restaurant, from which you can enjoy one of the most beautiful views over Florence.