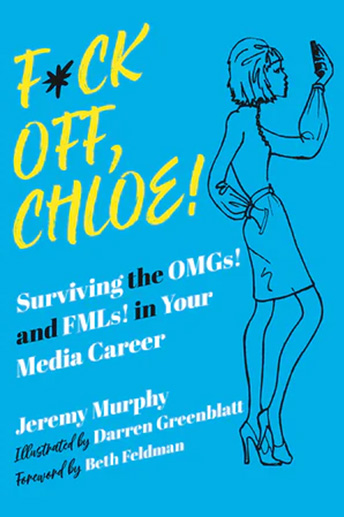 F*ck Off, Chloe! Surviving the OMGs! and FMLs! in Your Media Career, a saucy, inappropriate humor book by first-time author Jeremy Murphy and illustrator Darren Greenblatt, has become the talk of media since its March 2022 debut. Mocking woke-ism, millennials and Gen Zers, and GoogleDropSharedTransferDoc nonsense that has pervaded the workplace, F*ck Off, Chloe! is being hailed for its snarky, hysterical, take-no-prisoners’ reflections on the PR industry and media as a whole. The New York Post called the book “hilarious,” while OK! crowed it’s “a witty take on surviving in the industry that will make you laugh out loud.” The New York Daily News’ Richard Johnson wrote “media mavens will love F*ck Off, Chloe!” WABC radio host Frank Morano called it “the funniest book I’ve ever read.”

Touted as anirreverent, unvarnished wake-up call for media industry and consumers alike, F*ck Off, Chloe! includes practical guides and tongue-in-cheek advice for media professionals, with chapters that include: “How to be Literally Woke,” “Reasons Why PR People Drink,” “Things to Consider Before Joining That Company,” “Reasons Why a Normal Person Should Call HR, But it Will Backfire and You’ll Get Fired, so Maybe Not,” “Things Media Care About, But Not Really” and “How to Interview With Anna” (as in Wintour).

“Now that I’ve forced my family, friends, colleagues, random associates, my cat and the staff at my local 7-Eleven to buy the book and leave positive reviews on Amazon, I’m hoping other readers do as well,” said Murphy. “Thankfully, the critics seem to like its sauciness and complete disregard for the rules of our industry, which is now filled with those who I call ‘The Chloes’ — entitled young people coming into the workforce armed with pre-written ‘value statements’ but zero experience. This book is NSFW and might get you fired, but hopefully it’ll make you laugh as security escorts you out.”

When asked if these perpetually triggered “Chloes” will read the book, Murphy says, “The Chloes of the world ‘can’t even’ and are ‘not strong enough’ to read a book this ‘major,’ but they’ll also say it ‘changed their life’ without even opening it.”

F*ck Off, Chloe! began in earnest in a private Facebook group called PR Marketing and Media Czars where Murphy began venting humorously about the many annoyances he’s experienced in the media universe. The responses from the community, which has more than 20,000 members, was immediate and prompted more thoughts, anecdotes and observations, all laced with Murphy’s biting humor.

Members of the group suggested his posts could be the makings of a book. “We get thousands of people posting to the Czars community, but Jeremy’s lists got instant notice and engagement,” said Cassin Duncan, CMO of PR Marketing and Media Czars, who founded the community with Jennifer DeMarchi, CEO. “He struck a chord with his voice, humor and insight and has provided endless humor, commentary, likes, sharing and even memes with his cutting words and observations. We’re very proud the Chloe story began with us.”

MORE OBSERVATIONS FROM THE BOOK

BASIC TRUTHS: There is bad publicity … There are stupid questions … No one is getting back to you … Everything is on the record … Anna was judging you … The writer did get your email, but deleted it … ‘We’ll keep you in mind’ will not be minded … The check is not in the mail … Fran Lebowitz is right about everything.

SIGNS YOU SHOULDN’T JOIN THAT COMPANY: The founder found his vision on a mountain climb … The HR department has added “people” to its name … Diversity is part of its “DNA,” but there are no minorities on your floor … There is more than one felon on the board of directors … Employees are encouraged to share their feelings, including the founder who regularly cries … Getting paid in Crypto Coins is now an option … “Open workspaces” … Your success plan includes “finding your authentic voice.”

YOU KNOW YOU’RE A PUBLICIST WHEN: You generally hate yourself … You can plot out a multi-tiered strategy but can’t balance your checking account … You circle typos in the newspaper … You know that if you were aboard the plane with the “Lost” passengers, they’d be sipping Mai Tais at the Four Seasons Maui right now.