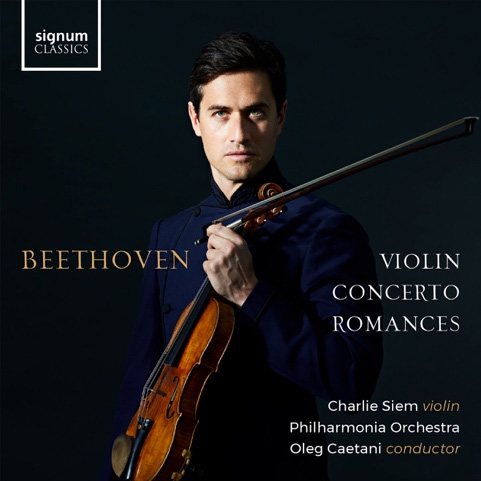 “It was the first piece I heard that inspired me to play the violin.”

When he was just three years old, violinist Charlie Siem heard something that would change his life: a concerto by Beethoven, which inspired him to pursue a career in music. Now one of classical music’s biggest stars, the virtuoso is paying homage to the master with his new album Beethoven: Violin Concerto Romances, performed with the Philharmonia Orchestra and conducted by Oleg Caetani. Featuring five tracks of Beethoven’s greatest pieces, the album is one of Siem’s most ambitious and challenging works yet, which he accomplishes with the trained ear, technical prowess, intuition and charisma that have become his hallmark. Beethoven: Violin Concerto Romances (Signum) debuts August 5 (pre-order available) and will be available in stores, online and on global streaming platforms.

The album, his first conceived since the pandemic, bears a deep personal connection for Siem, who notes, “It was the first piece I heard that inspired me to play the violin. I wanted to be able to play that piece in particular as it had opened a channel within my imagination that has stayed with me as a constant soundtrack to my journey since then. To be able to share my humble response to this mighty piece of music is incredibly rewarding.”

Siem’s last two albums, Between the Clouds and Under the Stars, became breakout successes owed to the artist’s crossover appeal. Though deeply rooted in classical music, both works extended his global fanbase and attracted a younger audience to the genre. Siem is one of several musicians credited for expanding the reach of the art form. “When Charlie Siem gets the tiger under the chin, it purrs,” hailed Vanity Fair.

“Charlie is hands-down one of the leading musicians of any age in the world, and we remain proud to be his creative home,” says Steve Long, director of Signum Records. “His interpretation of Beethoven’s Concerto is a real personal achievement for him, and it is an exquisite demonstration of his technical proficiency and passion that should delight classical music fans and Charlie’s growing fan base of new listeners.”

One of the world’s most captivating musicians, Siem was born in London, where he studied the violin at the Royal College of Music with Itzhak Rashkovsky, and later with Shlomo Mintz, while attending Eton College and Cambridge University. At age 30, he became the youngest Professor of Music in the UK (Leeds College of Music). He performs with one of the rarest instruments on the classical music stage — a priceless 1735 Guarneri del Gesù violin once owned by the King of Prussia. Siem has played all over the globe with many of the world’s finest orchestras (Royal Philharmonic Orchestra, Moscow Philharmonic Orchestra, Rotterdam Philharmonic Orchestra, Oslo Philharmonic and Czech National Symphony Orchestra) and conductors (including Charles Dutoit, Edward Gardner, Zubin Mehta, Yannick Nézet-Séguin, Sir Roger Norrington, Libor Pesěk and Yuri Simonov). He has performed for the Queen of Denmark and, after playing throughout China in 2016, was named Cultural Ambassador of Nanjing.

While an unabashed purist, Siem has expanded his repertoire to bring classical music to a wider audience, performing onstage with The Who, Bryan Adams and Jamie Cullen, all while gaining superstar fans like Lady Gaga, Patti LaBelle and Katy Perry.

Siem’s dapper, international lifestyle has landed him on Vanity Fair’s International Best Dressed List twice and made him a muse for designers like the late Karl Lagerfeld, who photographed him as part of the 2015-2016 Dior men’s campaign as well as for Little Black Jacket (Taschen), his artbook with former Vogue Paris editor Carine Roitfeld. Siem has also had numerous collaborations with fashion brands including Armani, Chanel, Dunhill and Hugo Boss.

Signum Records is a leading British independent label, specializing in classical music. It was awarded Label of the Year at the Gramophone Awards(2017) and has reached a milestone of 500 million streams. Founded in 1997, Signum boasts a catalog of more than 700 titles and continues to release more than 40 new recordings each year by internationally acclaimed artists.