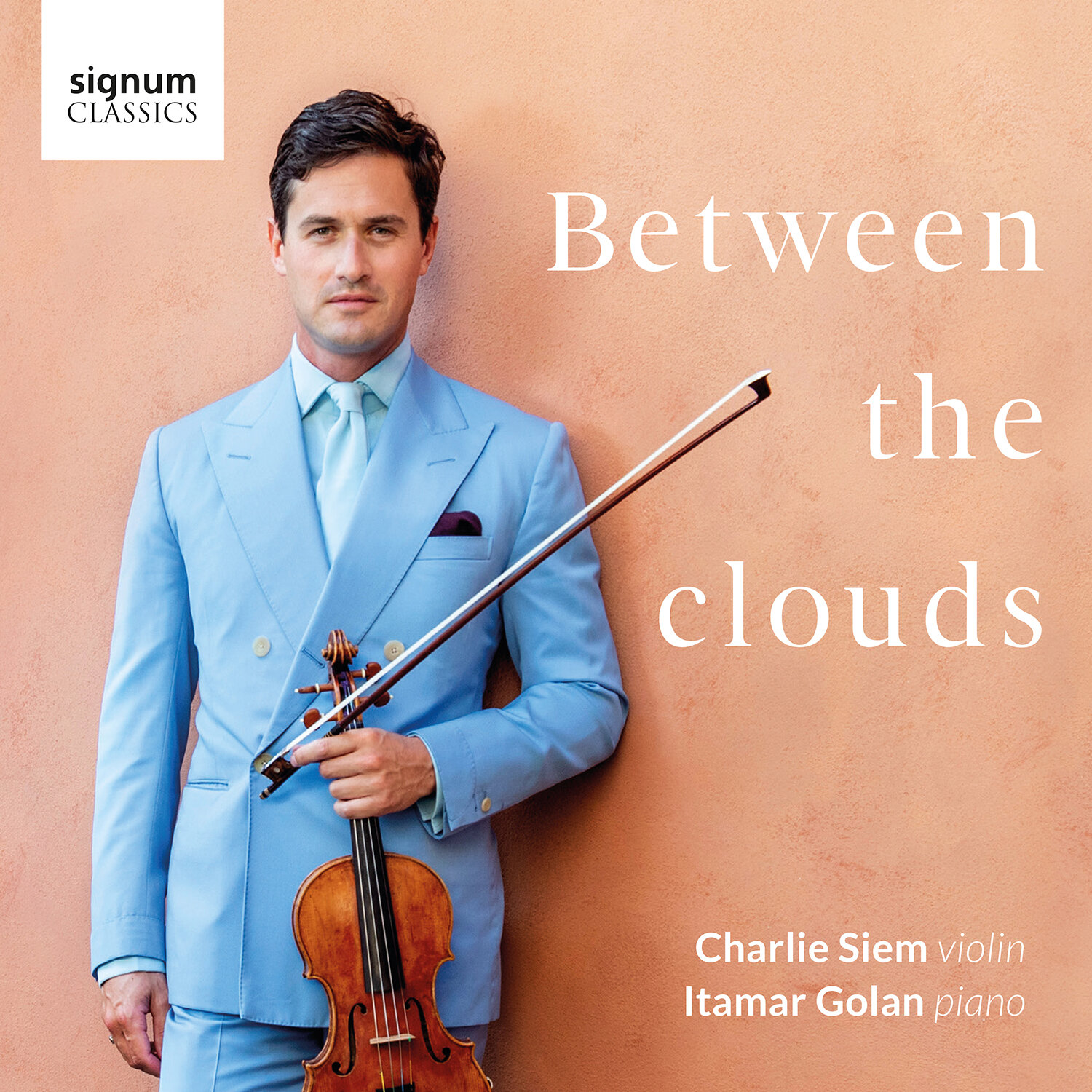 BETWEEN THE CLOUDS, A SALON-STYLE PERFORMANCE OF CLASSICS, FEATURING

Six years after his album Under the Stars became a hit with classical music audiences, violin virtuoso Charlie Siem is releasing his newest recording Between the Clouds, a 15-track collection from masters of the genre, including Kreisler, Sarasate, Paganini, Elgar and Wieniawski. The album, released by Signum Records, is Siem’s most mature yet, featuring a salon-style sound and mood evocative of Parisian nights. Performing with Siem on the album is pianist Itamar Golan. Siem is one of classical music’s brightest stars, a talent who has brought new listeners, including many younger audiences, to the genre with his sophisticated take on classical music, infusing his performances with a cosmopolitan edge uncommon in the form.  “When Charlie Siem gets the tiger under the chin, it purrs,” wrote Vanity Fair.

Between the Clouds follows in that tradition, featuring a highly curated selection of pieces that reflect Siem’s unparalleled taste and style.

“Between the Clouds is a collection of virtuoso pieces that Itamar and myself have played together in concert over the last few years,” says Siem. “It’s a very personal selection from the core repertoire that was a joy to record.”

Among the tracks featured on the album are:

“We’re incredibly proud to release Charlie Siem’s first album in six years,” said Steve Long, Director of Signum Records. “He is one of the finest young musicians on the world stage, and the repertoire of tracks he’s performed on Between the Clouds — including pieces by Kreisler, Sarasate, Paganini, Elgar and Wieniawski — showcase his incredible versatility as an artist. The Parisian-style ’salon’ quality to the album, which he performed with pianist Itamar Golan release, make Between the Clouds an exquisite collection of classical music fans will enjoy, as well as all the new listeners Charlie has brought into the genre throughout his career.”

Siem is one of the world’s most captivating young musicians hailed by Vanity Fair and the New York Times as a virtuoso who is bridging the worlds of classical music, fashion and pop culture. Siem is known internationally for his trained ear, graceful on-stage performance and precision and his off-stage charisma and style.

Born in London, Siem studied the violin at the Royal College of Music with Itzhak Rashkovsky, and later with Shlomo Mintz, while attending Eton College and Cambridge University. At only 30 years of age, he became the youngest Professor of Music in the UK (Leeds College of Music). He performs with one of the rarest instruments on the classical music stage — a priceless 1735 Guarneri del Gesù violin once owned by the king of Prussia.

The classically-trained musician also works with many of the world’s finest orchestras (The Royal, the Moscow and the Rotterdam Philharmonic Orchestras; the Czech and the Oslo National Symphony Orchestras) and conductors (including Charles Dutoit, Edward Gardner, Yannick Nézet-Séguin, Sir Roger Norrington, Libor Pesěk and Yuri Simonov) and performed for the Queen of Denmark.

Siem has also performed onstage with stars like The Who, Bryan Adams and Jamie Cullen, while winning a unique fan base including Lady Gaga, Katy Perry and Karl Lagerfeld.

The musician’s dapper, international lifestyle has made him a muse for designers like the late Karl Lagerfeld, who photographed Siem for both the 2015/16 Dior men’s campaign and his artbook Little Black Jacket (Taschen), which he did with former French Vogue editor Carine Roitfeld. In addition, he has been named to Vanity Fair’s International Best Dressed List in 2014 and 2017.

Signum Records is a leading British independent label, specializing in classical music. It was awarded Label of the Year in the Gramophone Awards (2017) and has also reached a milestone 350 million streams for its recordings. Founded in 1997, boasts a catalogue of over 600 titles and continues to release 50+ new recordings each year by internationally acclaimed artists.