Skyhorse Publishing Acquires “F*ck Off, Chloe: Surviving the OMGs! and FMLs! in your Media Career” by First-Time Author Jeremy Murphy 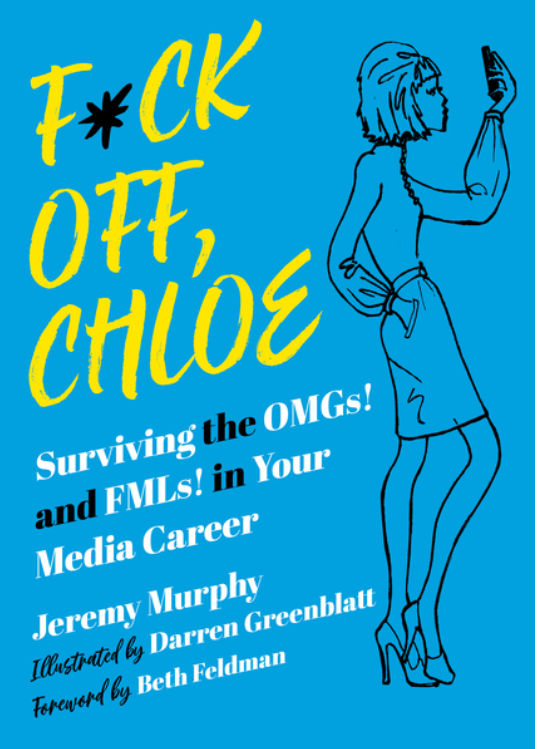 Surviving the OMGs! and FMLs! in your Media Career”

New York: Skyhorse Publishing will publish F*ck Off, Chloe: Surviving the OMGs and FMLS in Your Media Career by first time author Jeremy Murphy. The humor book, which will also include illustrations by artist Darren Greenblatt, will debut March 1, including hardcover and e-book editions. Lampooning industries he has worked in throughout his 25-year career, Murphy, a veteran of print journalism, network television and public relations, shares his love, scorn, hatred, and highly medicated amusement for his professions with snarky humor, keen observations, helpful tips, and interactive mix-and-match puzzles.

“’F*ck Off, Chloe’ is an unvarnished, ‘Come to Jesus’ wake-up call for media people who have drank too much Kool-Aid, and a cathartic smoke break for those who ordered scotch,” says Murphy. “I’ve tried to capture everything I love and hate about our industry and put it into lists, charts and graphs even people who only WhatsApp will understand. It’s honest, hopefully funny, spiteful in the right places, full of cold revenge, and likely to be the end of my career in media. So, overall, win-win.”

“Chloe,” continues Murphy “represents that person we’ve all met: the entitled 23-year-old who expects a trophy for coming to work, and a raise her first week. Hopefully, this book will help her, too. And she’ll remember this gesture after McKinsey & Co. tells her who to let go when WME buys the firm.”

Kathleen Schmidt, Publicity Director of Skyhorse, said, “Acquiring Jeremy’s book was an easy decision. His posts in the PR Czars Facebook group were often the very first thing that made me laugh during the day, and I know Chloe will do the same for many others in this topsy turvy industry.”

Included in F*ck Off, Chloe: Surviving the OMGs and FMLS in Your Media Career will be practical guides and advice for media professionals, like:

BASIC TRUTHS: There is bad publicity … There are stupid questions … No one is getting back to you … Everything is on the record … Anna was judging you … The writer did get your email, but deleted it … ‘We’ll keep you in mind’ will not be minded … The check is not in the mail … Fran Leibowitz is right about everything.

SIGNS YOU SHOULDN’T JOIN THAT COMPANY: The founder found his vision on a mountain climb … The HR department has added “people” to its name … Diversity is part of its “DNA” but there are no minorities on your floor … There is more than one felon on the board of directors … Employees are encouraged to share their feelings, including the founder who regularly cries … Getting paid in Crypto Coins is now an option … “Open workspaces” … Your success plan includes “finding your authentic voice”

YOU KNOW YOU’RE A PUBLICIST WHEN: You generally hate yourself … You can plot out a multi-tiered strategy but can’t balance your checking account … You circle typos in the newspaper … You know that if you were aboard the plane with the Lost passengers, they’d be sipping Mai Tai’s at the Four Seasons Maui right now

F*ck Off, Chloe: Surviving the OMGs and FMLS in Your Media Career began in earnest on a private Facebook group called PR Marketing and Media Czars. There, Murphy began posting snarky lists about media that annoys him to the 20,000+ member community. The response was immediate, and he continued sharing his thoughts, anecdotes, and observations, laced with biting humor. Murphy continued posting throughout the spring, amassing a trove of content that members of the community suggested could be the makings of a book.

“We get thousands of people posting to the Czars community, but Jeremy’s lists got instant notice and engagement,” said Cassin Duncan, CMO of PR Marketing and Media Czars, who founded the community with Jennifer Demarchi, CEO. “He struck a chord with his voice, humor and insight and has provided endless humor, commentary, likes, sharing and even memes with his cutting words and observations. We’re very proud the Chloe story began with us.”

Included in the book are illustrations by Darren Greenblatt, an artist known for his “Ugly Lives of Beautiful People” sketch series. Greenblatt, who is also a respected fashion designer and entrepreneur, worked with Murphy is capturing the dichotomy of “Chloe” — effortlessly chic but at the same time vapid and clueless.

“Bringing Chloe to life is a dream come true for an illustrator,” said Greenblatt. “Jeremy’s voice is utterly unique, and capturing that through my sketches has been an incredible opportunity. We’ve known each other for more than a decade and always talked about collaborating on a project that marries our abilities and talents. This has been the perfect match — we both share a visceral understanding of who Chloe is, and I’m looking forward to sharing that through my artwork.”

F*ck Off, Chloe: Surviving the OMGs and FMLS in Your Media Career will include a forward by veteran media executive Beth Feldman, who worked with Murphy for years at CBS and co-hosts with him a podcast called “The Giggle.”

Jeremy Murphy is a sarcastic, embittered veteran of the media industry. Founder of 360bespoke, a respected boutique PR agency in New York, Murphy handles a full roster of clients in the lifestyle, beauty, fashion, and start-up fields. Previously, he was Vice President of Communications at CBS, where he worked for 14 years. There, he oversaw PR for many of its divisions and created its glossy magazine Watch. Murphy started as a journalist, working with Knight Ridder newspapers and Mediaweek. He is a graduate of Florida Atlantic University and lives in New York with his cat, Champers.

Darren Greenblatt has sketched fashion collections since he was a child growing up in Pennsylvania. He moved to NYC to attend The Fashion Institute of Technology. Darren has written two books and created and sold two TV show pilots for Fox and NBC/Sony. Darren has been featured in Vogue, Harper’s Bazaar, Allure, Marie Claire, and Women’s Wear Daily, and his designs have been sold at Bloomingdales, Bergdorf Goodman, Saks Fifth Avenue, Kirna Zabete, and Jeffrey New York. Darren has appeared on The Apprentice, CNN, The Today Show, Rachael Ray, and The View. After 26 years in New York City, Darren and his family moved to Princeton, New Jersey, in 2015, where he paints and designs from his studio.

Guinot’s NEW Age Immune Serum fights the effects of aging. The serum has a youthful effect…

Skyhorse Publishing Acquires “F*ck Off, Chloe: Surviving the OMGs! and FMLs! in your Media Career” by First-Time Author Jeremy Murphy

Skyhorse Publishing Acquires “F*ck Off, Chloe: Surviving the OMGs! and FMLs! in your Media Career” by…

360bespoke is one of New York’s most sophisticated, discerning PR agencies. With a first class collection of talents and brands in lifestyle, beauty, fashion, pursuits, and the arts, we provide elegant, tailored strategies, campaigns, and media coverage that over delivers results and exceeds expectations.